The challenge: getting the most energy out of your PV system
Watch the full webinar on demand 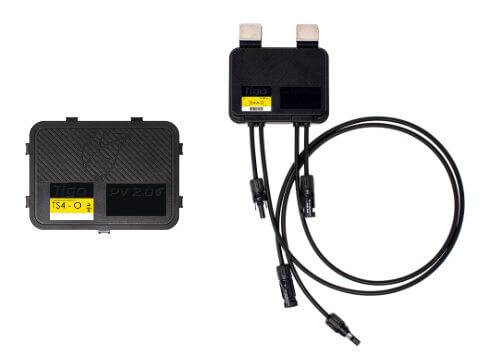 As covered in a previous post, PV systems are subjected to energy loss due to mismatch. When modules are not performing identically, the strong and weak modules have different power curves. On a PV system without optimization, the inverter must make compromises to find the best operating point for the string of modules. If the string current shifts downwards to accommodate the weaker modules, the stronger-performing modules are not contributing as much power as they could be. If bypass diodes are activated on the weaker modules, those cells are not contributing at all.

Tigo optimizers, like the TS4-O and TS4-A-O, use a method called impedance matching to improve system energy production.

Tigo optimization works with the inverter’s maximum power point tracking (MPPT) to allow both strong and weak modules to perform at the levels dictated by site conditions (shading, clouds, etc.) The inverter chooses an operating point for the string and the optimizers adjust output for the individual modules.

With module-level impedance matching, each PV module contributes what it can, without compromising production from stronger modules or fully bypassing shaded modules. This also helps to protect PV modules from hotspots since excess energy is not being wasted as heat when cells are bypassed.

Optimizers monitor input from the PV modules and adjust the output current when site conditions change. Since the intelligence is built in to each TS4 unit, they work out of the box to increase production without relying on central communication except for monitoring and safety features.

Visualization of an optimized string.The optimizer acts like a valve, allowing a portion of the string current to partially bypass underperforming modulesBecause Tigo optimizers only adjust output when needed, they can achieve maximum production with a best-in-class 99.6% conversion efficiency.

The results: Tigo outperforms the competition.

A study conducted by the National Renewable Energy Laboratory (NREL) measured energy loss from partial shade and recovery from Tigo’s optimization technology. They found an average of 36% of energy lost due to mismatch was recovered by optimization.

The Tigo TS4 based optimization solution utilizes revolutionary Predictive IV, allowing it to quickly respond to changing conditions. It brings each module to its optimal power output point, recaptures energy lost due to mismatch, and increases total energy production.

Predictive IV works with the majority of standard off-the-shelf inverters and battery chargers on the market and does not require any specific installation setup, commissioning, or operational consideration.

Tigo’s PIV-based solutions outperform any other DC optimizer or microinverter in the market today. TS4 optimizers equipped with the state-of-the art Predictive IV are available today from leading module manufacturers.

To join in on discussions about solar or ask questions on solar, visit our Tigo Community page. To leave a comment on this blog, click here.