Q&A: Reflecting on the Solar Industry with Zvi Alon

The text below is a partial transcript from a UBS call with Zvi Alon, the Chairman and CEO of Tigo Energy. Zvi answers questions about how Tigo products align with the solar industry and market.
Watch the full webinar on demand 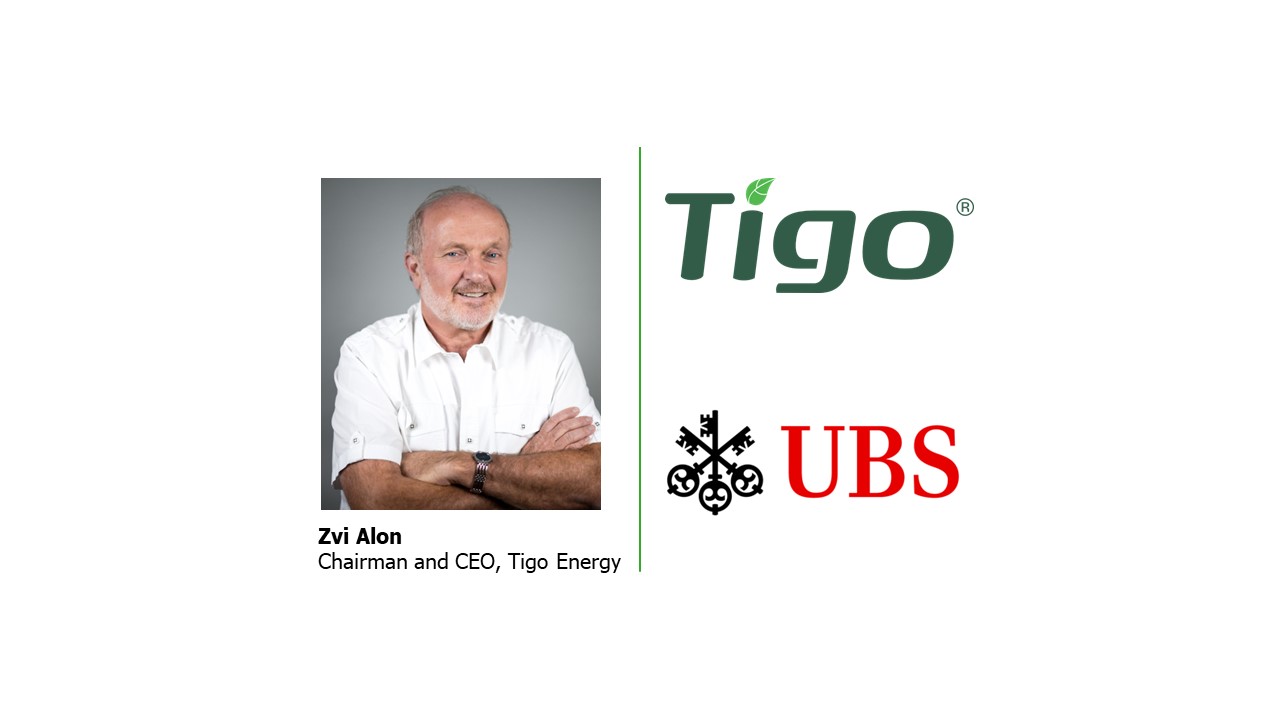 Question: Could you discuss how you view the growth of the MLPE market relative to the broader solar and storage market growth rates. Is MLPE still growing faster as it's adopted on more and more applications?

The quick answer is yes; it is growing faster. MLPE was a latecomer to the space initially. With the adoption of rapid shutdown globally, every single module installed on the rooftop must have rapid shutdown devices in those designated countries. And similarly, all over the US, it is now mandatory for all rooftops to have rapid shutdown, which was not the case just a few years ago. This increased the MLPE market from 20% to 30% of installations to 100%.

Similarly, customers realize the value proposition of optimizers which enables the generation of more energy from the same panels. They specifically address issues such as shading and mismatch resulting from any other interferences on the panel, like dust or bird poop.

We’re seeing an increase in the number of units installed because MLPE solves both the rapid shutdown and the optimization needs of a site. So, it is growing faster than the market growth of solar systems.

Question: Is MLPE the only way to meet the rapid shutdown requirements – meaning you can't just install a string inverter anymore?

That is correct. A panel will generate anywhere between 40 to 60 volts on its own. The rapid shutdown requirement states that you need to reduce voltage to less than 30 volts within 30 seconds. So, every panel you install must have a rapid shutdown device attached to it. The string inverter cannot do it. It can’t shut down the panel itself without any help from a device dedicated to just shutting down the panel.

Furthermore, all panels are connected serially – one to the other – to generate anywhere between 500 volts to 600 volts on the roof. And again, the requirements are that you will have less than 80 volts inside the array boundary and less than 30 volts outside the array boundary in less than 30 seconds. So even if you put two panels together, you still need to have a module-level shutdown. And the rapid shutdown requirement is spreading all over the world and is now being adopted in other locations.

Question: You noted that you're having quite some success in the C&I market. What are some key considerations when applying and optimizing a solution on a larger scale installation? Do you need to put optimizers on every module? How do you get that product to scale to larger installations cost-effectively?

There are two solutions in the market requiring that you place the optimizer equivalent to the MLPE on every unit. In Tigo’s optimization architecture, our technology allows the customer to place the optimizers (which are a bit more expensive than deploying shutdown only) on the required devices. In other words, you're not required to deploy 100%. So, that's one big differentiator that helps customers reduce the cost of the MLPE to assist them.

They can opt to select either rapid shutdown only (which is about half the price of the optimizer) or opt for full optimization if there is a need to mitigate mismatch and generate more energy from the system itself. So, this is a vis-à-vis technology.

Regarding size for C&I, the residential installation average is 18 to 20 panels for ten installations. So, they are very small systems. On the C&I and utility space, you start with 200-400 or more panels per installation. In the case of Tigo and its solution, we have several systems with over twenty to thirty thousand units installed in a single system. So, Tigo mastered the idea, technology, and various supporting capabilities to serve the market. It's not just for the small systems, which are 20 units each, but the sizable systems that go from hundreds of units per system to tens of thousands of units per system. That's a unique value proposition for C&I and small utility-scale projects.

We regularly see customers adopting our solutions to assist them with large-scale module-level power electronics sites. For us to provide customers with tens of thousands of units to help them is becoming commonplace. You need to have a solution that allows not just the units to work in such large systems but also to communicate.

For instance, imagine you need to collect data from 20,000 panels instead of 20 panels. The problem of data collection manifests itself by growing exponentially. Tigo solved the problems with scale and our solution monitors these sites in increments of seconds, which has positioned us to have an edge in the largest system deployments.

Question: As the best and easiest plots of land to build solar are taken, and you move into more complicated, land-constrained, or sloped areas, is the adoption of MLPE on those installations increasing? I could see a case where you would have a complex layout, like if a row of modules is partially shading another row, how could you benefit from a product like this?

Yeah, we do see that. Installing a system that goes with the contour of the land creates challenges for energy generation. This is because the panels are not pointed in the same orientation, causing a difference in energy generation, which can bring down the performance of the whole string. So, optimizers are pretty much the only way to go. You cannot maximize the energy generation from all panels when they don't point in precisely the same direction unless you use an optimizer. It is the best, most efficient solution. So that's one reason to deploy optimizers in larger systems.

On commercial rooftops, if you don't use an optimizer, the rooftop that is impacted by shade or other obstacles can be reduced if there is mismatch, which minimizes the amount of energy you can generate from the rooftop unless you use optimizers. So, optimizers increase performance and the total economically viable installed capacity.

And now that it’s mandatory to have rapid shutdown, it's just a matter of price differences. Some customers opt to install rapid shutdown only, but others would go for the optimizer, which includes rapid shutdown and monitoring, to generate additional energy from their systems.

Additionally, in large systems, specifically floating systems, we see that more and more customers are adopting the shutdown capability. Electricity and water don't like each other sometimes, so customers install rapid shutdown units on the panel itself for safety purposes. For example, if the system is on a lake, in the ocean, or anywhere else near water, you have to ensure that you can shut down the panels if there are either maintenance needs, a cleanup, or any other hazards.

So, the adoption of MLPE is coming for multiple reasons on multiple different sites and market segments. Still, they all lead in one direction: the growth of MLPE adoption is faster than the growth of the solar systems themselves.

Also, Tigo products can be installed as retrofit products. The specification of the product is such that we work with pretty much any panel at any size that has been shipped whenever in the last 10-15 years. So, the systems that still receive feed-in-tariffs are excellent candidates for upgrades, and optimizers are the only way to increase the energy generated from them. So, you're able to see the growth coming from new systems and regulations requiring MLPE and improving existing installed systems that require additional energy to enjoy the benefits of the feed-in tariffs.

Question: Is being able to do a retrofit unique to Tigo’s product. What would you estimate is the percentage of sales or shipments coming from the retrofit market?

So, in terms of a feature, yes, it's unique to Tigo. Mainly because our MLPE works with any inverter. In the case where you want to go through one of the two big competitors, the cost to retrofit will be prohibitively high because you have to replace essentially all the inverters that you have, which sometimes includes the wire boxes. It’s pretty much like installing it from scratch, and that's not cost-effective.

The estimated retrofits that we see are still very small but growing. We are getting many more inquiries now from existing systems installed that have that feed-in tariffs granted for another ten plus years, and it makes it very attractive to install optimizers to increase the output of those sites. So, we are seeing that segment grow nicely.

Question: Could you talk a bit about AC versus DC-coupled systems. With AC being more of a microinverter solution, what advantages do you think a DC-coupled system provides? Do you believe that both AC and DC have a place in the market long-term? Do they each have their positive attributes?

The two systems have different attributes, and long-term, I believe that DC will grow and capture a larger market share for very simplistic reasons.

For example, let’s say you want to charge your batteries with solar. In an AC-coupled system, the solar energy from the panel (DC) gets converted to the grid or the house (AC). Then from the home or grid, it gets converted back to DC, which is a waste of energy that can cost you for not just the single conversion but sometimes two conversions. Again, this is because you go from solar (DC) to AC, then from AC to the battery (DC) itself. This results in a loss of about 7% of energy.

On the other hand, there is a need for AC specifically for systems that have not been designed from the get-go with a DC-coupled solution. Let's say we have a solar-only installation, and now we wish to add batteries, or storage, to the existing system; it’s much more cost-effective not to replace the inverter but to add an additional charger for battery management. That way, like in the case of our EI Solution, it can serve as an AC-coupled system. So, there is a market for that, and both markets will continue to grow and thrive.

Question: As far as adoption rates of storage in the residential market go, there have been significantly more products coming to market, more product availability driving consumer awareness and installer awareness. Do you think that adoption of storage has been limited more by cost, or has it been product availability? Do you see that possibly accelerating now that there are many more options in the market?

Yes. There are early adopters, mid, and late adopters like in many other markets. And similarly, we've seen an acceleration in storage moving from the early adopters when the price was a prohibitive element – only the guys who could afford or decided to pay for the high-price batteries and larger systems got them.

Many suppliers have entered the market, pushing prices down like it has been doing on the PV module and then the inverter side. Now we're seeing a similar sentiment around storage.

But the availability of products is also a reasonably significant factor. The demand is surpassing supply.  Prices are still being kept at a reasonable price, but they are higher than where they should be.

The market is very robust – this is not happening just in the US, but we see the same in Europe. The demand for storage is growing substantially, and there is an increased supply in the market itself. It's a fast-growing segment, similar to MLPE.